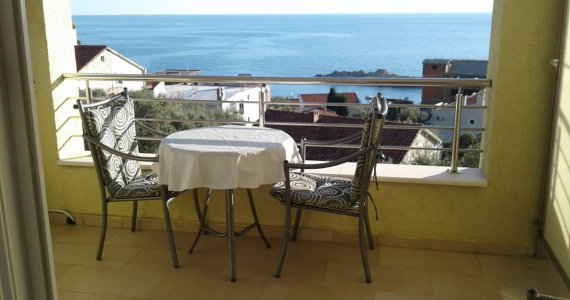 Your hosts stay in the BMV Apartments Sveti Stefan will do everything for your peace and comfort.

The perfect place with a beautiful view and kind hosts! I highly recommend this place!

Everything you need was in place, I recommend it with a pure heart. I hope to see you next time.

The hotel complex Sveti Stefan, located on the island of the same name, is a unique symbol of the Montenegrin coast. The former fishing village was built in the 15th century thanks to the natives - the Paštrovići tribe.

The treasures they seized from Turkish galleys were used to build their homes. This fortified settlement was named after the church of St. Stephen. Due to its convenient position, Sveti Stefan was the trade and traffic center of Paštrović. The place began to lose its significance at the end of the 19th century, when the population began to emigrate.

In the middle of the 20th century, a decision was made to renovate the houses on Sveti Stefan and adapt them to the needs of tourism. That is how the luxury city-hotel Sveti Stefan was created. The facades of the houses, walls, roofs, streets have retained their original shape, and the interior of the houses has been given a more modern hotel comfort. The island is connected to the mainland by a narrow land route. Zemljouz divides the coast of Sveti Stefan into two sandy beaches - private hotel and public.

Until the 1990s, Saint Stephen hosted numerous celebrities, such as Sophia Loren, Kirk Douglas, Claudia Schiffer, Sylvester Stallone, members of the English royal family and many others.